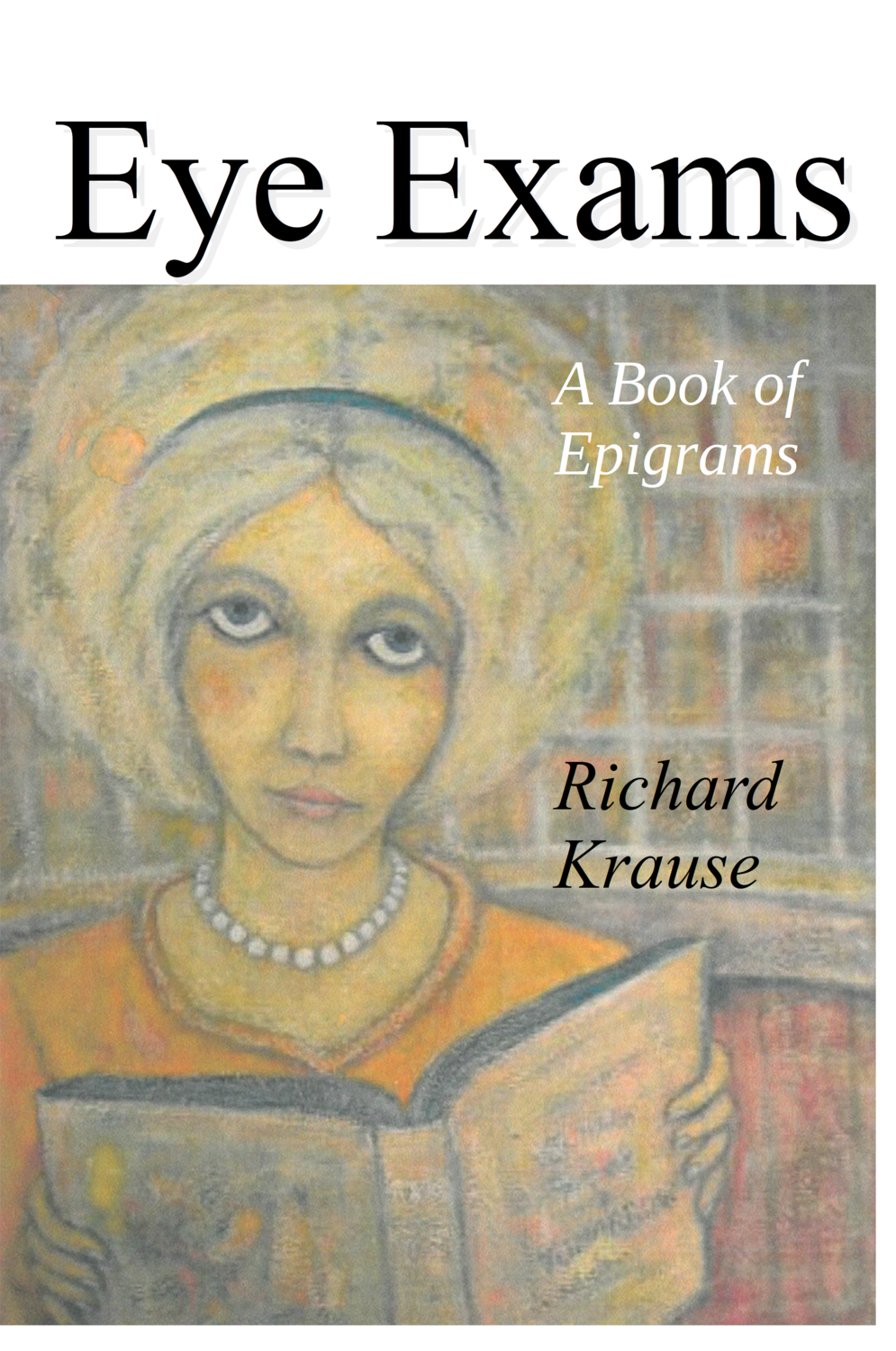 Eye Exams, A Book of Epigrams, by Richard Krause

A modern epigram is a concise, often witty short statement that has a twist. It has a range of possibilities that the aphorism’s established truth often lacks. Epigrams can go where the writer wants without worrying about being set in stone, or hardened by an anticipated veracity. You want epigrams to be true certainly, but the expectation is that they need not be for all time, and that sheer play can often be their objective.
Epigrams can be stabs at thought, sudden insights, or summations of a life. The fact that they don’t parade in the best dress gives freedom to all types of garb; tattered rags, even so occasional nakedness is exposed. Ultimately writing epigrams exposes the reader as well as the writer, and by extension all human nature -- broadening our observations of the species. The writer is both estranged and embedded, the malady and the cure. His observations are his instruments; he doctors, observes, uncovers, and makes those imaginary incisions that always address the often-necessary ignorance we live by. The sole object is understanding.

The preface defines an epigram as “a concise, often witty short statement that has a twist.” Epigrams are time-full, whereas axioms, aphorisms and other quotes-to-live-by are timeless standards. Epigrams may be true for now, but not later, yet make a lasting impact nonetheless. This collection’s epigrams deal in a variety of topics, from mundane to moral, such as: knowledge and beauty, carnal desires, power and courage, art, philosophy, religion, justice, honesty and jealousy, mastery and failure, and word play. A common theme is how observations reflect most the observer.

Written over 4-5 years, mostly in New York city, the epigrams do come from a context. I found myself trying to locate the story in the collection. The literal space between the epigrams on the page lends itself to letting the imagination wander and make connections. Who is the author? Under what circumstances would this statement have come about? Some statements use “I;” some “he” or “she.” To whom do they refer?

Eye Exams itself becomes a subject. It addresses readers as “you” or “we,” inviting introspection, critique and reaction. It holds up a mirror, examines us, our vision, scrutinizing our beliefs and thoughts. It is difficult not to respond to its many bold statements, like “Violence is the knife no one knows you are carrying, that can’t be found even if you are frisked.” But as strong as our agreement or disagreement may be, the collection wiggles out from under any blanket appraisal. “Contradictions are the unheralded completion of everything.”

Best read in short bursts, as the disparate insights startle and linger, this flexible book confounds and compels. It tests our willingness to question ourselves for the sake of truth.