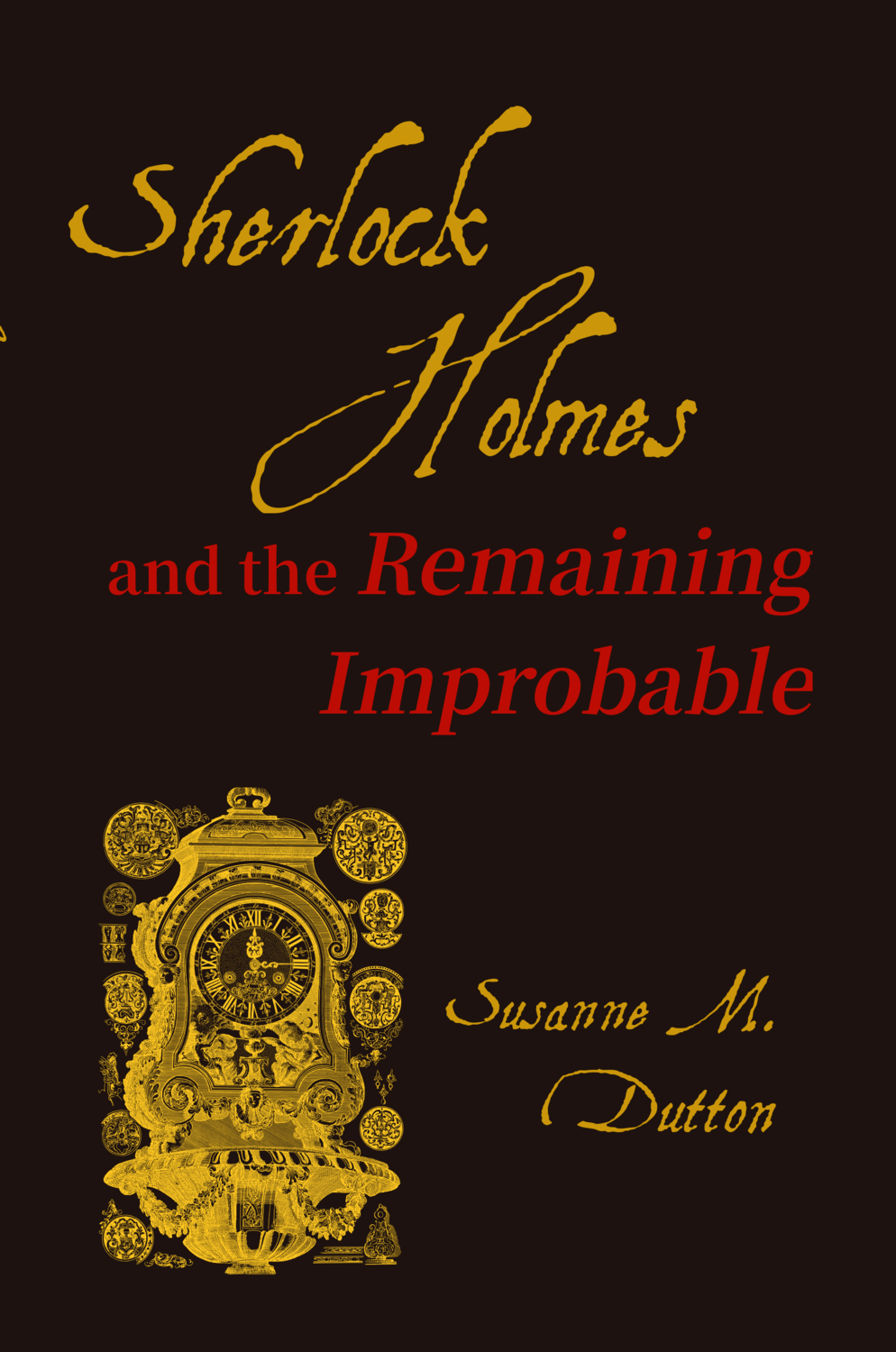 Sherlock Holmes and the Remaining Improbable, by Susanne Dutton

"The most unique and outrageous Holmes adventure no one will ever hear about."

The game is not afoot. The Better-Every-Day world of 1895 is gone, even hard to recall as WWI ends. From his rural cottage, Holmes no longer provokes Scotland Yard’s envy or his landlady’s impatience, but neither is he content with the study of bees. August 1920 finds him filling out entry papers at an out-of-the-way psychiatric clinic on the Normandy coast. England has declared his cocaine use illegal and he aims to quit entirely. Confronted by a question as to his treatment goal, Holmes hesitates, aware that his real goal far exceeds the capacity of any clinic. His scribbled response, “no more solutions, but one true resolution” seems more a vow than a goal to his psychiatrist, Pierre Joubert. The doctor is right. Like a tiny explosion unaccountably shifting a far-reaching landscape, the simple words churn desperate action and interlocking mystery into the lives of Holmes’ friends and enemies both.

Through the doctor's notes, we follow the treatment of his famous patient. In his first session, Holmes recounts his earliest drug experiences, the coca leaf tea applied to his teething pains and the popular Godfrey’s Cordial and Mrs. Winslow’s Child Preservative, containing opium and morphine. He admits that on entering Christ Church College, Oxford, his access to cocaine widened as his reliance deepened. As he once famously asserted to Watson, the drug lifted him out of the intolerable “stagnating routines” of life. He can’t recall when the lines blurred, when life itself became the thing from which he craved lifting.

However, he and Joubert work well together, and the doctor is encouraged by his progress. Hypnosis fascinates Holmes, until in one trance he regresses beyond vivid boyhood memories of his father’s French art collection to an ancestor’s disturbing experience in the French Revolution. Joubert adamantly counsels that these images are not history, only unique creations of the psyche. But something has shifted, and Holmes begins an inexplicable deterioration in body and mind.

Some weeks afterward, John Watson opens a late afternoon telegram originating in Eastbourne and directed to his London surgery:
MOST DEEPLY CHERISHED FRIEND JOHN. THE GAME IS AFOOT. PLEASE TAKE THE BRIGHTON LINE
FROM VICTORIA TO EASTBOURNE AT TEN IN THE MORNING. REVOLVER UNNECESSARY.
-SHERLOCK HOLMES

The message gratifies Watson. Obviously, Holmes has completed his treatment in Normandy and misses their old life together as much as he. Happily, he anticipates another case and looks forward to being not just Dr Watson, but “Watson, Confederate and Chronicler.”

And so Watson entrains once more for Eastbourne and soon finds himself caught up in a most astonishing intrigue, as Holmes has discovered that his worst enemy has left him the key to his hastily scribbled wish, if he can give everything in return. Can his friend stop the clock that has been ticking toward Holmes' demise, or will Watson be forced to sit powerless and watch as Holmes walks straight into danger?