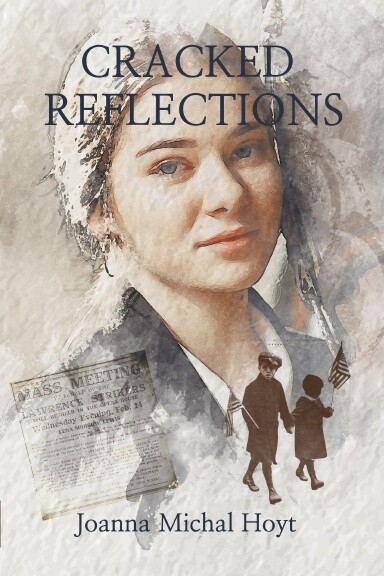 The literary historical novel Cracked Reflections is set in an imaginary Massachusetts mill town during the real textile strikes of 1912, known as the Bread and Roses labor movement. This tale is particularly relevant in a time of conflicting news stories, high political passions, and concern about immigration—but such times have recurred over and over in our history.

Skillfully blending everyday struggles with the imaginary, Ms Hoyt tells the story of life in a small New England industrial town, from the point of view of twelve year old Kassandra. Her German immigrant family is one of hundreds with at least one family member who works in the mills, spinning yarn and weaving wool and cotton cloth for the fashionable American public. Few outsiders know how dangerous these workplaces are, how the life expectancy of millworkers plummets, partially due to many beginning work as mere children.
Only when their pay is reduced and several have been severely injured, do the workers decide they have had enough. The clashes between law enforcement, under the control of politicians and business men, and the largely female immigrant workers turn violent, attracting the attention of the public. Answers are demanded and a Congressional inquiry is formed.
Kass has friends on both sides of the issues. She works in a diner after school where many of the townfolk take their meals, getting to know several individuals well who are not like herself. She makes new friends with Italian and Polish children, once her schoolmates, who had to quit to work in the mills to support their families. Many have lost one or more parents to injury or mill sickness. Two newspaper reporters on opposite sides of the problems keep her emotions spinning, her head swirling and often confused. She likes and trusts Sergeant McCleary, but soon he is forced to act, and Kass, caught up in the middle, is seriously injured.
And Kass is afraid that the beast-man, with his voice of evil who whispers doubts and taunts in her head, is pulling the strings that encourage the bitterness, fear, and anger in all of them to explode. But small acts of kindness and understanding demonstrate that evil cannot when so long as love is in your heart: love for friends, family, and even those unlike oneself.

Geared toward teen/YA readers, Cracked Reflections has something of the nuanced historical rendering of Sally Gunning’s The Rebellion of Jane Clarke, something of the quiet exploration of mysticism and mental health of Elizabeth Goudge’s The Scent of Water, and in the way of E. L. Doctorow’s Ragtime, skillfully weaves history with the imaginary, transporting readers to a time when the line between the laboring and privileged classes was stark and wide.

I’m so glad I finally had a chance to read Joanna Hoyt’s Cracked Reflections. It’s a beautifully written, thought-provoking exploration of workers’ lives and the 1912 labor struggles.

There’s no need to quibble over minor corrections about the Lawrence struggle and the timeline of the strikes that followed. The book is fiction, but it’s captivating fiction that’s framed effectively by what happened in Lawrence. The book captures the essence of those strikes as well as workers’ lives on the job and in their communities. Hoyt’s use of German and Italian phrases underscores the mill towns’ multi-ethnic reality as does her addressing ethnic tensions and biases as well as cooperation.