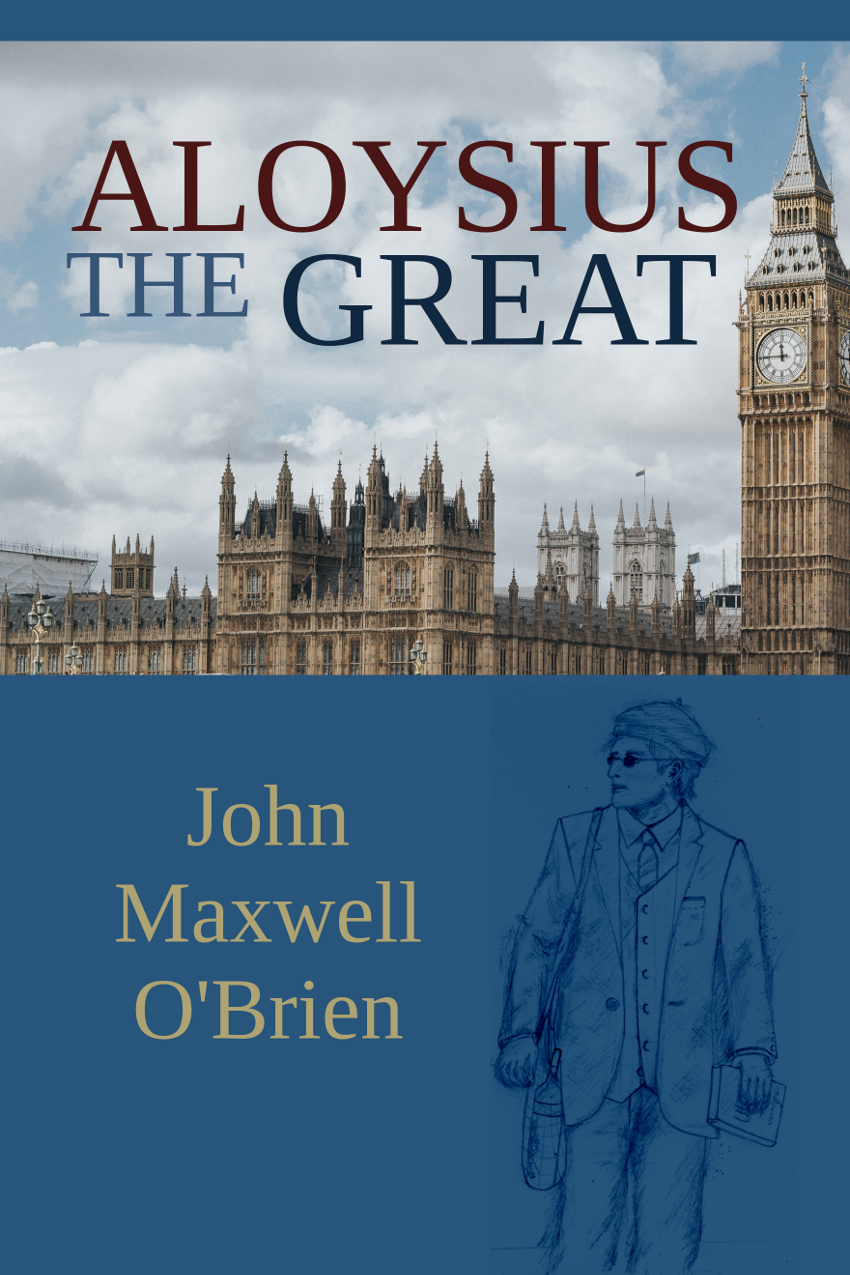 ALOYSIUS THE GREAT is the story of Aloysius Gogarty, a young alcoholic American professor, pressured into becoming resident director of his college’s study-abroad program in England. He departs resentful of the task foisted upon him, and disturbed at having to leave behind a woman he’s recently become infatuated with. In England, Gogarty finds himself on a runaway roller-coaster of rebellious students, drugs, sex and academic politics. He continues to court his inamorata from afar and his alcoholism spirals out of control. Gogarty gets help in coping with his kaleidoscopic problems from an Oxford counterpart who is a wickedly witty and stalwart companion. They consume epic quantities of alcohol while concocting outlandish schemes to address these challenges. Miraculously, Gogarty not only survives this mayhem, but emerges a hero and crowns his achievements by coming to grips with his alcoholism. Gogarty’s transatlantic courting also yields surprising results.

Aloysius the Great is a treasure trove for admirers of James Joyce. Most
of its chapters parallel episodes in Joyce’s Ulysses. Many of its
characters come from Ulysses and/or individuals significant in Joyce’s
life. Words and phrases from Ulysses (all within the public domain) are
sprinkled harmoniously throughout the text and the reader is treated to a
savory sampling of Joyce’s prose.

A number of novels drawing on classics of literary fiction have recently
achieved critical acclaim and commercial success. In this sense
Aloysius the Great is akin to such works as McBride’s A Girl is a
Half-Formed Thing (Joyce’s A Portrait of the Artist as a Young Man),
Yanique’s Land of Love and Drowning (Marquez’s One Hundred Years of
Solitude) and O’Neill’s The Dog (Kafka’s The Trial).

John Maxwell O'Brien, PhD, is an emeritus professor of history (Queens College, CUNY) and has
published the best-selling biography Alexander the Great: The
Invisible Enemy (Routledge). Alexander has been translated into Greek
and Italian and was under option contract to the movie producer and
director Oliver Stone for two and a half years. Dr. O'Brien was resident director
of the CUNY study-abroad program in England during the 1960s, just as
Gogarty is in the novel. He is considered an expert on the history of
alcoholism and has an article on that subject in the Oxford Classical
Dictionary.

Critical Accolades for Aloysius the Great

“A
fabulous story, cleverly written, tough, unsentimental; no malarkey
here, only the real McCoy, where dialogue is used like a form of
martial art and revelation of character comes in the form of ambush
after ambush. Here is a novel written with the revelatory dramatist's
touch, an eye for detail and an ear for satire. Master Maxwell
O'Brien has the true gift.” Thomas McCarthy
is a renowned Irish poet and the author of Pandemonium
and
Prophecy

“Aloysius
crackles
with vintage Hibernian craic. O’Brien’s prose is so vivid you can
see the beaded bubbles winking at the brim.”

Erik Martiny,
author of The
Pleasures of Queueing

“Aloysius the Great is a
delight to read and a real puzzle-pleasure for any James Joyce
aficionado. I was intrigued and moved by the Joyce-inflected
characterization of the two chief characters, Gogarty and Mountjoy.
Their relationship has the boozy intellectual swagger of Buck
Mulligan and Stephen, and Gogarty shares Bloomian moments of
practical rumination and sensitive introspection. O’Brien’s novel
is a treasure trove for admirers of Joyce and a book you’ll find
hard to put down: its characters are irresistible.” Robert Spoo,
author of several books and numerous articles on James Joyce and
erstwhile editor of the James Joyce Quarterly

“Wickedly witty, Aloysius the
Great combines incisive observations of present-day academic
culture with a symphonic meta-frame of Joyce’s Ulysses to render a
literal and literary landscape at once serious and sardonic.
Joycean-inspired absurdity notwithstanding, this novel will be a
delight to read by anyone versed or un-versed in the pleasures of
Ulysses who enjoys the terrifyingly funny and the delightfully
disturbing. John Maxwell O’Brien’s rich scholarly savvy is
inextricably tethered to his talent for the comedic, and the result
is nothing short of extraordinary.” Dorie LaRue, author of The
Trouble with Student Affairs which received the 2019 Kirkus Award
for Independent Novel

“Aloysius
the Great exists in its own place, teeming with wit and grace, in
a spellbinding exploration of the faults in clay of which we are
cast. Set pieces intersect the idiom of Ulysses, making fresh again
themes and style which established the modern novel. Our hero is not
the best of men; he is the mesh of weaknesses that make for everyman.
As with Joyce, a book to be wrestled with, a book to be fought over,
but always on its own terms, and in its own outstanding quality.”
James Walton is an award-winning Australian author of four acclaimed
collections of poetry. His fifth collection, Snail Mail Cursive,
is scheduled for release late in 2020.

Review of ALOYSIUS THE GREAT in the Irish Times, October 2020

Featured in Irish Arts & Entertainment as the "Best Irish-Interest Novel of 2020", ALOYSIUS THE GREAT earns another accolade

The Author Chats about Aloysius the Great in The London Magazine, April 2021